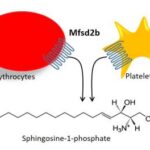 The bloodborne chemical signal sphingosine-1-phosphate (S1P) is released by blood cells to regulate immune and vascular functions. How S1P is released to the circulation was unknown for a long time, until now. Researchers from the National University of Singapore (NUS) Yong Loo Lin School of Medicine reported in the journal Nature that they had discovered this pathway in blood cells. Their findings have broad implications for the treatment of various immune and vascular diseases.

S1P is required as an extracellular signal for the trafficking of immune cells such as T and B cells in the circulation. These cells are part of the adaptive immune response, an important component of normal immunity. However, they become detrimental in conditions such as autoimmune and inflammatory diseases. Blocking of the S1P signalling pathway with fingolimod phosphate, a chemical compound that is analogous to S1P, has been successfully used in the treatment of multiple sclerosis. 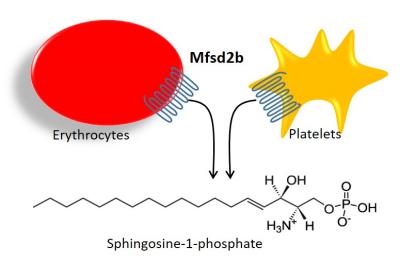 Lack of S1P signalling is also harmful to blood vessels, often resulting in vascular complications such as cardiovascular diseases and stroke. In the study, performed by Assistant Professor Long N. Nguyen and his team (which includes postdoctoral fellow Vu M. Thiet and several NUS students), the researchers discovered the way blood cells produce S1P for signalling roles. They found that mice lacking the major facilitator superfamily transporter 2b (Mfsd2b) protein in their blood cells had low levels of S1P in the circulation, which resulted in an abnormally low circulating lymphocyte count and increased sensitivity to shock. Their breakthrough findings pave the way for the manipulation of circulating S1P levels for the treatment of inflammatory and vascular diseases.

Mfsd2b is needed for the export of the signalling molecule sphingosine-1-phosphate from red blood cells & platelets https://t.co/7ngNa4TxSQ pic.twitter.com/KofBSscun3

For a long time, researchers have suspected that hematopoietic cells constitute the major S1P supplier to the circulation. However, the molecular transport machinery was missing, making it a daunting task to understand the roles of this chemical signal in circulation.

“Our study identified a critical molecular target for sphingosine-1-phosphate production,” explains Dr Nguyen, who is from the Department of Biochemistry at the Yong Loo Lin School of Medicine. “This opens up new avenues of investigation aimed at regulating sphingosine-1-phosphate signalling for the treatment of various diseases.”

Research article: Mfsd2b is essential for the sphingosine-1-phosphate export in erythrocytes and platelets