Can the Public Revolutionise How Mouse Models Are Studied? 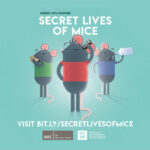 The mouse is a vital model organism as we seek to understand the function of genetic variation. The analysis of genetic variants in the mouse has provided crucially important insights for the biomedical and clinical sciences through hypothesis-driven discovery research. When researchers make changes to the genetic make up of mice, they can subsequently observe them to deduce the effect of the introduced changes. Mice are sociable animals and are housed in groups, however, in order for scientists to observe them, they may previously have been removed from their cages and into an unfamiliar environment.

Scientists at MRC Harwell have worked together with Actual Analytics in order to develop the Home Cage Analysis system (HCA), which has the potential to change the way that mice are studied, improve their welfare and drastically change the way that we collect data from mouse models by allowing the public to contribute.

The challenge proposed by the NC3Rs CRACK IT initiative was to ‘develop an automated, minimally-invasive or non-surgical system to assess activity, behaviour and interaction of at least two mice in the cages and setting the animals were reared in’. The Home Cage Analysis System was the result. The system is able to track the movement of three individual mice without removing them from their social group, only requiring the minimally invasive insertion of a microchip. Through high grade video recording, it is now possible to observe the activity of mice 24/7.

How Will This Be Of Benefit?

Not only do these developments have the potential to improve the welfare of mice involved in research, but it also has exciting implications for the science itself. It will now be possible to collect more data on mouse behaviour, potentially providing us with vital information on the early stage of diseases. Additionally, the more data that is collected, the greater the statistical power of testing. It is also important not to forget that mice are naturally nocturnal, and the Home Cage Analysis system will allow information to be captured on mouse behaviour at night, a time when previously this important information would have been missed. Perhaps most excitingly, the Rodent Little Brother project allows the public to get involved and to supporting cutting-edge research on mouse models.

What is the Role of the Public?

The rise of machine learning is very exciting, and could have lots of positive implications in research. The end goal of this citizen science project is to have a computer algorithm to track and annotate mouse behaviour for us. However, this algorithm first needs to learn what different mouse behaviours are. By allowing people to manually annotate these mouse behaviours, we will be able to feed the algorithm enough information to be able to collect data 24/7 in the future!

Overall, it is hoped that this project will advance understanding of how genes cause disease and aid the development of new therapies, all whilst improving mouse welfare.

To get involved in the project, visit the Rodent Little Brother Home Page.

To read about mouse welfare within the IMPC, click here.