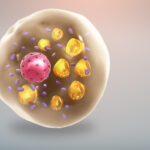 Branched-chain amino acids (BCAAs) are amino acids that have a central carbon atom with a branch of three or more other carbon atoms (otherwise known as aliphatic side chains.) BCAAs include valine, leucine and isoleucine. They play several key roles in metabolism, such as promoting protein synthesis, neurotransmitter synthesis and the production of energy through glycolysis.

Increased circulating levels of BCAA are linked to obesity, insulin resistance and type 2 diabetes. This link is still unclear – higher BCAA levels should correlate with more energy expenditure which is usually correlated with weight loss.

A recent paper using Pparg-floxed mice supplied by our consortium member the Jackson Laboratory explored BCAA activity in brown fat. Brown adipose tissue (BAT) is well known to be a thermogenic (heat-producing and energy using) organ that helps remove excess glucose from our systems. The thermogenic function of BAT is crucial for survival and metabolic health. Humans usually have the highest amount of BAT during infancy. This is because BAT produces heat and helps infants keep warm whilst their muscles are still underused. As humans grow older and gain more mobility, this thermogenic role is taken over by skeletal muscle and we lose most of our BAT. In adults, BAT helps with cold acclimatisation, not only producing heat but also stimulating the uptake of glucose, lipoproteins and fatty acids.

The researchers performed a metabolite analysis on healthy male human subjects, dividing them into those with high BAT activity and low BAT activity. They used a cold stimulus of 19 Celsius, a temperature point that stimulates BAT thermogenesis without triggering skeletal muscle shivering.

The cold exposure stimulated lipolysis (the breakdown of fat) and led to a significant increase in circulating fatty acids but did not change blood glucose levels. Valine (Val) levels were significantly reduced in the high BAT subjects but not in the low BAT subjects. As Val concentration dropped, BAT activity increased. A similar response was also seen for Leucine (Leu) concentration but not for any other amino acids. Val, Leu and Isoleucine (Ile) reduction after cold exposure was also seen in obese mice.

Yoneshiro et al then tracked Leu uptake in various tissue types. After cold acclimatisation, they found a robust increase in BAT and a modest increase in inguinal white adipose tissue (WAT) in mice. Uptake was also seen in liver and heart tissues but no significant change was seen in these organs. BAT also displayed high Val oxidation compared to different types of WAT in both mice and humans.

BCAA oxidation can increase fatty acid oxidation which can reduce the risk of obesity. It is the oxidation of BCAAs that promote energy production and protein synthesis, particularly in muscle tissues. In BAT, BCAA is primarily oxidised in the mitochondria, the organelle within cells that produces energy for all cell functions. How BCAAs are transported into the mitochondria, and the transporter that facilitates this, is still unknown, as well as how BAT exactly utilises BCAAs.

How does BCAA Uptake in BAT Affect Metabolism?

As BAT is already known for the metabolic clearance of glucose, Yoneshiro et al investigated whether BAT also contributes to the clearance of BCAAs. They generated a mouse model without functioning (ablated) BAT and compared them to controls. After cold exposure, they found that the BCAA concentration was significantly reduced in control mice but not in the BAT-ablated mice, suggesting BAT plays a role in clearing BCAAs.

The researchers next examined how BCAA catabolism functioned within BAT after clearance, as well as how this affected energy homeostasis.

The branched-chain α-keto acid dehydrogenase (BCKDH) complex is found in the mitochondria and catalyses key oxidation reactions involved in energy production. To examine the extent to which BCAA catabolism in BAT regulates energy homeostasis, Yoneshiro et al produced another mouse model in which BCAA oxidation is impaired specifically in BAT. They deleted the Bckdha gene which produces a subunit of BCKDH, impairing BCKDH’s function. In this model (BckdhaUCP1-KO), they saw that there was no difference in BAT mass and thermogenic gene expression but the core-body temperature was significantly lower after cold exposure compared to controls. Thermogenesis in BAT was impaired (but not in other tissues) and the mice had higher circulating BCAA levels. This suggests BCAA oxidation is vital for both BAT thermogenesis and BCAA clearance.

Further examination on the use of BCAA within BAT was performed using Leu tracing, stimulation of brown adipocytes with noradrenaline and cold exposure. The researchers found that acute cold exposure activates BCAA oxidation in the TCA cycle, whereas chronic cold promotes other lipogenesis (fat production) processes.

How Does the Mitochondria Take Up BCAAs?

The big question now was: how do cells take up BCAAs into the mitochondria? The researchers found that members of the SLC25A protein family would be promising candidates due to including many mitochondrial amino acid transporters. Transcriptome analysis found high expression levels for the already known SLC25A20 and SLC25A22 in mouse and human BAT but also two uncharacterised members: SLC25A39 and SLC25A44. Only SLC25A44 had increased mRNA expression after cold exposure and also showed positive correlations with UCP1 and BCKDHA mRNA expression. SLC25A44 was localised to the mitochondria and was more highly expressed in BAT than other metabolic tissues.

The researchers needed to determine the function of SLC25A44 so they generated brown adipocytes with ablated SLC25A44 (Slc25a44-KO.) Val and Leu uptake was significantly reduced, unlike other amino acids. This response was also found using shRNAs to deplete SLC25A44 whereas ectopic expression in Neuro2a cells restored Val and Leu uptake. Similar responses were also found in cell-free systems.

To determine the role of SLC25A44 in BCAA catabolism, the researchers selectively knocked down (reduction in the expression) SLC25A44 in BAT in mice (Slc25a44BAT-KD.) The KD mice had larger lipid droplets in their brown adipocytes and impaired BAT thermogenesis. SLC25A44-deficient mice (Slc25a44-KD) mirrored this response as well as higher levels of triglycerides and lower Val oxidation in BAT. Core body temperature was also significantly lower compared to controls after cold exposure but plasma BCAA levels were not lowered. Together, this suggested that “SLC25A44 is the primary BCAA transporter in BAT [and] is required for cold-stimulated BAT thermogenesis and systemic BCAA clearance in vivo.”

What Does This Mean for Obesity and Diabetes?

The researchers proposed the following model:

“in addition to glucose and fatty acids, cold stimuli potently increase mitochondrial BCAA uptake and oxidation in BAT, leading to enhanced BCAA clearance in the circulation. This process requires SLC25A44, a mitochondrial BCAA transporter in brown adipocytes. In turn, defective BCAA catabolism in BAT results in impaired BCAA clearance and thermogenesis, leading to the development of diet-induced obesity and glucose intolerance.”

The researchers highlighted the implications these findings have for our understanding of obesity and diabetes. There is ongoing evidence that incompletely oxidised intermediates resulting from BCAA oxidation can cause insulin resistance. Lowering circulating BCAA levels in rats via inhibition of kinase BDK or overexpression of phosphatase PPM1K has also been found to improve glucose tolerance, regardless of body-weight. Reduced BCAA oxidation and the subsequent accumulation of BCAAs can cause inhibition of insulin signalling. This study suggests impaired BAT activity in obesity and diabetes reduces systemic BCAA clearance. Active and well-functioning BAT acts as a significant metabolic filter for circulating BCAA and protects against obesity and insulin resistance.

The researchers finally suggest that utilising SLC25A44 to enhance BCAA catabolism could improve BCAA clearance. This, in turn, could assist with glucose homeostasis and metabolic diseases such as obesity and diabetes.