The secret to building a strong heart lies in blood vessels 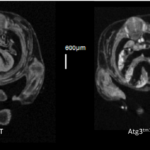 Research using IMPC resources offers new insight into congenital heart disease and may allow new therapies to be developed for human patients. The research is  published in Nature Communications, and is summarised below.

Every year, a small number of babies are born with hearts whose muscles are spongy and thin, although exactly what causes this condition isn’t clear. Now, Stanford biologists think they may have found a clue: spongy heart muscles could be the result of improperly developed blood vessels surrounding the heart.

Apart from a deeper understanding of congenital heart disease, the results could shed light on how heart muscle forms in the first place. Until now, no one realised what an important role newly-forming blood vessels played in supporting the growth of heart muscle – or that the support is more than just a matter of supplying oxygen.

Yet the study’s two senior authors, Ashby Morrison and Kristy Red-Horse, and their colleagues did not set out to understand congenital heart disease or to change how people thought about heart development in utero. Instead, they attribute the project to something altogether more random: their offices are right next to each other.

Next door and miles away

Apart from the fact that both are biologists, Morrison and Red-Horse don’t have that much in common as researchers. For one thing, Red-Horse, who is a member of Stanford Bio-X, the Cardiovascular Institute and the Child Health Research Institute, studies the development of tissues and whole organs, often by breeding her own genetically modified mice. Much of Morrison’s research, meanwhile, centers on the basic molecular machinery that reads out messages in the DNA and uses it to build functioning cells – usually in yeast.

“Kristy’s on the opposite side,” said Morrison, a member of Stanford Bio-X, the Child Health Research Institute and the Stanford Cancer Institute.

Still, their physical proximity got them talking, and among the topics of conversation was a particular molecule that Morrison had been looking at, one that turns out to be present not just in yeast but also in mice and many other living things, too. That got them wondering: what did that molecule do in those other living things, and what would happen if it disappeared?

Time to make some mice

In yeast, the molecule, called Ino80, is pretty important – without it, yeast get sick and die off – but in other organisms, “we didn’t know what to expect,” Morrison said.

To find out, Red-Horse and her lab started the years-long process of genetically modifying mice to lack Ino80, either throughout their bodies or in specific areas of the body or specific cell types. To do this they utilised IMPC resources.

The most intriguing results, Red-Horse said, came from mice which didn’t produce Ino80 in certain heart cells – called endothelial cells – that are the progenitors of blood vessels that feed the muscles of the heart. Without Ino80, the network doesn’t develop properly, and as a result, cardiac muscles couldn’t develop properly either – instead remaining spongy and weak.

It was at this point that the team noticed the similarity between their mice and a form of heart disease called left ventricular non-compaction, the third most common disease of the heart muscle. “It was a complete surprise,” Morrison said.

Curiously, blood flow through those missing vessels – and the oxygen it provides – is only part of the story. In a follow-up experiment, the researchers grew heart muscles in a dish along with endothelial cells that had not yet formed into blood vessels. The team found that when those endothelial cells produced no Ino80, the heart muscle didn’t develop properly. Apparently, Red-Horse said, “endothelial cells are producing something that’s a growth factor” for cardiac muscle cells. “The next step is to identify that factor.”

Still, what they’ve found already should change how both doctors and biologists think about how the heart forms. In both cases, taking into account the role of blood vessels could help explain normal muscle development in mice and then humans or lead to new therapies for diseases like left ventricular non-compaction. Farther down the road, the research could also have implications for regenerative medicine specialists working to grow hearts and other organs in the lab, Red-Horse and Morrison said.

Article edited from a press release for Stanford News