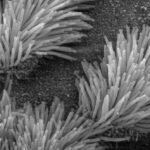 Members of the IMPC Consortium at CNR-Monterotondo (Italy) have used embryonic stem (ES) cells produced as part of the IMPC project, to engineer a Ccdc151 ‘knockout’ mouse model that is valuable for the study of human ciliopathies, gaining significant insight into this set of rare conditions.

Primary ciliary dyskinesia (PCD) is a rare, genetic disorder that results in chronic respiratory tract infections, abnormally orientated internal organs and infertility. The root cause of these symptoms are dysfunctional cilia and flagella, which if functioning correctly, are finger-like projections on the surface of cells that act to clear mucus and debris by coordinated beating. In addition, normal function of cilia is required for migration of egg and sperm cells.

Ccdc151 is a gene that is known to be associated with PCD, and here, researchers have engineered a mouse model, using embryonic stem cells from the IMPC, in which the gene is deleted. Common features of PCD in human patients such as left-right body asymmetry and dysfunctional spermatogenesis were detected in these Ccdc151-knockout mice. “The Ccdc151-knockout mouse model faithfully recapitulates several features of human PCD disease” remark Francesco Chiani and Tiziana Orsini, co-first authors of the paper. “The availability of this animal model will allow researchers to further dissect the mechanisms by which pathological conditions develop in different organs”.

This animal model will be useful for studying mechanisms underlying hydrocephalus, a condition whose treatment has not changed for decades.

The researchers also observed that Ccdc151-knockouts develop severe hydrocephalus – a condition in which cerebrospinal fluid accumulates in the brain, causing increased pressure inside the skull and potentially leading to brain damage and other complications. This is the first example of hydrocephalus caused by loss of function in the Ccdc151 gene. Although hydrocephalus is rarely seen in human patients with PCD, having a mouse model that exhibits all of the features of hydrocephalus could be useful for researchers. “This animal model will be useful for studying mechanisms underlying hydrocephalus, a condition whose treatment has not changed for decades”, said the lead authors. It is hoped that further studies may help to uncover other genes that interact with Ccdc151 that lead to the development of hydrocephalus.

The researchers made extensive use of X-ray micro-CT 3D imaging to study the hydrocephalic brains of Ccdc151 knockout mice – a technique that uses X-rays to create a virtual 3D model of a target object. Additionally, a novel micro-CT method was used to study expression of the Ccdc151 gene in the brain. This novel method is based on the generation of a molecular signal within the mouse brain. The authors remarked that “this micro-CT imaging methodology could be applied to facilitate studies on gene expression directly in the intact brain carrying the lacZ reporter gene, which is widely used as a reporter gene in mouse models.”

The link between Ccdc151 and ciliary function is now clear, but the mechanism by which the Ccdc151 protein contributes is less so. “The precise mechanism by which Ccdc151 protein accomplishes its function is unknown and will be addressed in future research”, says Chiani. The Ccdc151-knockout mouse model, generated via IMPC resources, could be “instrumental to dissect the role of the motile cilia in diverse physiological processes during development, adult life and aging”.

In addition to providing biological resources that can contribute to research such as this, the IMPC is curating a catalogue of mammalian gene function, with phenotyping data for knockout mouse models such as Ccdc151.